If you’re in search of a unique and beautifully designed ring, then a Celtic engagement ring just might be a perfect choice. Full of interesting history and romantic meaning, these traditional Irish rings feature intricate details and are always sure to stand out.

What Is a Celtic Engagement Ring?

A Celtic engagement ring is inspired by ancient Celtic designs that have meaning behind them. They come in a variety of different designs, the most popular styles being the Claddagh, Celtic Warrior, and Celtic Knot.

“They incorporate unique knots and milgrain braids that symbolize everlasting love,” says jeweler Avi Mirpuri. “The difference is really in the aesthetics of the band and setting, though they might also use more unique center stones like a heart-shaped moissanite.” Ahead, Mirpuri and diamond expert Kim Kanary share the history of Celtic engagement rings, tips on how to buy the perfect one, and what type of bands to pair them with. 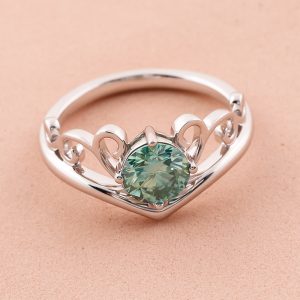 Celtic engagement rings have been around for a very long time, and each style has its own special meaning. “It is said that the first Celtic ring was spotted in the Irish fishing village called the Claddagh over 300 years ago,” Mirpuri reveals. “There have also been many other stories, with one going as far as the ring being dropped into the lap of a widow by a flying eagle.”

They were popular with royalty as well. According to Mirpuri, the Celtic ring became more popular after it was worn by Queen Victoria.

These rings are often treated like treasured family heirlooms and are passed down from mother to daughter for generations. Each style has its own unique meaning. For example, Kanary explains that the intersecting curved bands of Celtic Knots represent eternity and everlasting love. “The popular Trinity Knot features three curved bands that intersect to make three points and a triangular middle,” Kanary says. “While the meaning of this design has been debated throughout history, many have made parallels to religion and relationships, but it’s also an opportunity to create your own meaning.”

One of the biggest advantages of Celtic engagement rings is the special meaning behind them. “They can provide an added level of sentiment, tradition, and originality to your wedding jewelry,” Kanary says. They tend to feel more personal and are basically the opposite of the popular diamond solitaire rings.

Another advantage is that Celtic engagement rings can come in such a wide range of styles, really allowing you to customize your ring. Claddagh rings can feature various stones. 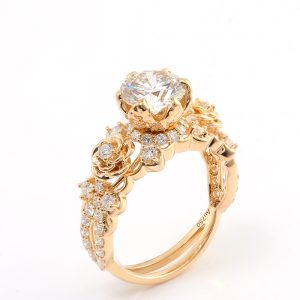 What to Look for in a Celtic Engagement Ring

How can I ensure my engagement ring is durable?

Kanary says that the most important thing is to find a ring that can withstand everyday wear. “Opt for a more durable metal, such as 14K gold or platinum, instead of sterling silver, which is common for Celtic rings,” she recommends. And since some Celtic rings incorporate gemstones in the design, you should also opt for a durable stone, like a diamond.

Mirpuri recommends keeping it simple, and choosing something like a classic metal ring or a thin, petite pavé eternity ring. “The Celtic ring is usually quite unique and eye-catching, so you don’t want your wedding band to steal its limelight or ‘overdo’ the look,” he says. If your engagement ring features a curvature design (like Trinity Knot and Claddagh rings) Kanary says “a thin eternity band is a fitting complement with the designs. If you are interested in a curved band to fit the contour of your ring, you may want to explore custom designs.” 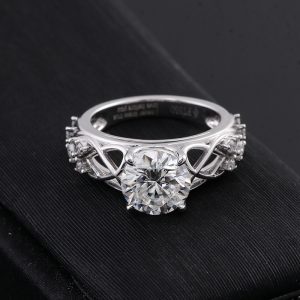 How to Care for a Celtic Engagement Ring

How you care for your Celtic ring really depends on what it’s made up of. Traditional Celtic rings are made of sterling silver, which does tend to tarnish easily. To keep it clean, remove it when doing household cleaning and try to keep it out of direct sunlight. You can clean it with gentle soap and water when needed.