The 12 Most Popular Diamond Shapes for Engagement Rings

It’s no secret that the cut of the main stone makes all the difference when finding your dream ring. Each sparkles in its own way, and deciding which one appeals to you is a great place to start. Think about what’s important to you in everyday jewelry. Do you go for a more modern look, or do you frequent consignment shops for your next great vintage find? Do you want to elongate the appearance of your fingers, or would you rather have a rock that looks huge? All of these factors depend on the stone cut, and, lucky for you, we’re here to break them down.

The most popular diamond cut for engagement rings is round brilliant. Round brilliant-cut diamonds are the quintessential sparklers due to their outstanding light performance and universal shape that works in an endless number of setting style.

But there are, of course, options for all kinds of brides. Consider a princess-cut diamond for a more angular and contemporary look with just as much brilliance as round-cut. Or, if you love vintage settings, go for a cushion-cut diamond, which boasts an elegant sparkle and old-world feel. Step-cut diamonds, like Asscher and emerald, are sleek and angular, and they also have more transparency than other cuts. Radiant-cut diamonds mimic the emerald shape but have more facets for a bigger shine.

For something more unique, pear, marquise, and oval-cut diamonds stand out and make your fingers appear longer, while trillion-cut diamonds sparkle in a modern triangular shape. For the low-key bride-to-be, opt for a baguette diamond band that nixes the idea of a center stone altogether. And, for only the most romantic, there are heart-shaped diamonds, which sort of speak for themselves.

Whether you’re a bride in search of that “something new” or prefer a more vintage-inspaired ring, here are the 12 most popular diamond cuts for engagement rings. 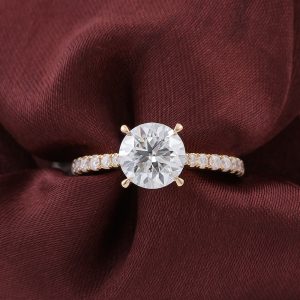 Brides everywhere flock to round-cut diamonds. Considering that its shape maximizes the fire of the diamond at the proper reflection of light, it’s no surprise that this is the reigning stone (we’re all guilty of falling for a good sparkle). Round, brilliant-cut diamonds work well as solitaires, in two- and three-stone setting, and even in geometric settings for a more retro look. These diamonds are great brides who love the classics, but if you’re on the more alternative side, you may want to consider a cut that’ll appear on fewer fingers. 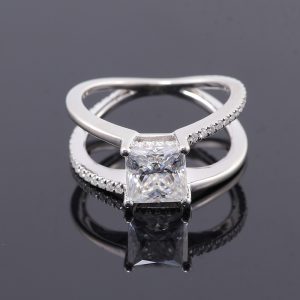 What bride doesn’t want to feel like a princess on her big day? Enter the eponymous princess cut, another widely popular engagement ring style. The princess cut’s versatile face-up shape—complete with square or rectangle sides—makes it a prime choice for nearly any ring style. You’ll get a more modern and geometrical look while still boasting a ton of brilliance, and they’re generally much less expensive than the more popular round-cut diamonds. Be sure to choose a protective setting, though, as princess-cut diamonds are known for chipping at the corners or falling out. 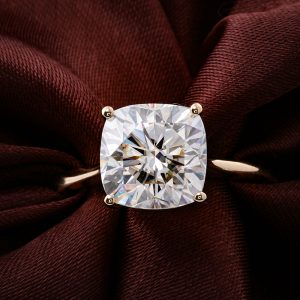 This exquisite cut is often compared to a pillow, thanks to its square-cut combination with rounded corners which, when combined with the cut’s classic 58 larger facets, increases the stone’s brilliance. The cushion-cut daimond has been around since the 18th century, and it was huge in the 19th century when most gemstones were cushion-cut (though it was referred to then as the mine cut). They’ve recently surged back into popularity, emanating a total old-world vibe that’s perfect for vintage settings. They do have a less intense sparkle than brilliant-cut diamonds, and though they look great in modern settings, they aren’t the most contemporary. 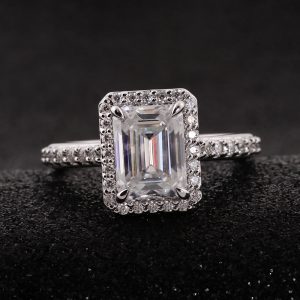 Characterized by a rectangular step cut, an open table, and cropped corners, the emerald cut diamond is often favored for its Art Deco aesthetic. While it has more of an understated sparkle—some like to call it a “hall-of-mirrors” effect—its long silhouette and angular lines capture the diamond’s clarity, while dramatically catching the light. When set vertically, their shape helps fingers look longer and more slender, perfect for those engagement ring selfies. However, because it has fewer facets to distract from blemishes, clarity is of the utmost importance, as is color. It’s also not a super flashy style, so if you’re looking for a mega sparkler, it’s not the cut for you.

Also called the Navette cut, the marquise cut is known for its regal feel. Its distinctive silhouette is marked by curved sides and pointed ends—an elegant football shape if you will. Its long, narrow shape not only creates an illusion of greater size but elongates the finger when set vertically. It also boasts a brilliant sparkle. However, because of it’s delicate pointed edges, there’s a risk of chipping and breakage if the ring is not set properly. It also tends to show what’s called a “bowtie” appearance across the center of the diamond. If the ring is not cut well, this can be very noticeable and is generally undesirable. 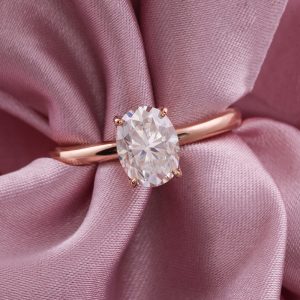 Essentially an elongated version of a round diamond, the oval-shaped diamond can have just as many facets as a round-cut stone, which means it has the capacity to sparkle just as much. It’s an elegant and out-of-the-ordinary choice, and its oblong shape can lengthen the finger. If not cut properly, though, it tends to have a similar “bowtie” effect as a marquise-cut stone, and it also tends to show flaws and inclusions. One way to combat this is to choose a salt-and-pepper oval-cut diamond so that otherwise unwanted inclusions become an essential part of your look. 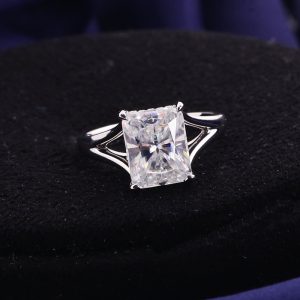 True to its name, a radiant-cut diamond—invented in 1977 by Henry Grossbard—catches the light in a big way. The shape mimics an emerald-cut stone, but the unique, deep-cut facets allow for extra sparkle. Brides who don’t want to stray too far from the classic shapes will appreciate this stone’s timeless nature and bespoke spirit. It doesn’t have the sharp edges of a princess-cut diamond because it actually has eight corners, which minimizes the chances of chipping. If you desire a big-looking rock, the radiant cut may not be the one for you, as the deep cuts make the stone appear smaller. It’s also quite rare, so you may not be able to find a wide selection of stones in this cut to choose from. 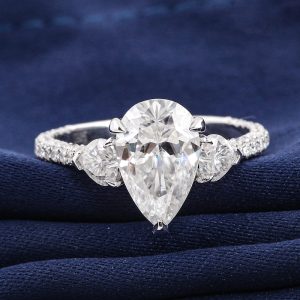 Also known as a teardrop, the pear-shaped diamond is a hybrid of styles that dates back as early as the 1400s. Taking its cues from both the oval and marquise, this unique shape is a perfect choice for vintage-inspired brides who play by their own set of rules and think that two is better than one. Since more of the stone shows from the top view, pear-shaped diamonds tend to appear larger than they are, so if size matters to you, this cut is a great choice. Since the pear cut has a pointed tip, these rings work best in a bezel or half-V setting, as they’re prone to chipping. They also tend to show inclusions and can be less-than-brilliant if they aren’t cut properly. 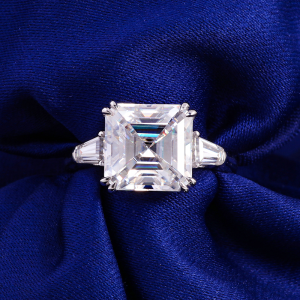 The Asscher cut has been a favorite among the fashion-conscious crowd ever since Carrie Bradshaw modeled an Asscher cut during her brief betrothal to Aidan Shaw on Sex and the City. Named after the jeweler who patented the design in 1902, the Asscher cut features an octagonal shape with 58 large step facets. Popular during the Art Deco period, its uniquely symmetrical geometric design still maintains radiance and sparkle. Since it doesn’t have sharp edges, it’s not prone to breakage, and it looks great in a variety of settings. This cut does, however, require you to invest in a high-quality diamond with lots of clarity, as it tends to show blemishes. 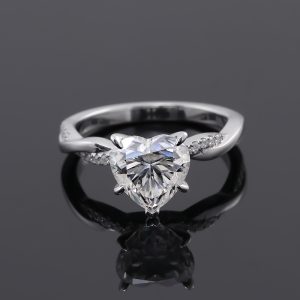 An eternal symbol of love, heart-shaped diamond aren’t traditionally used as engagement rings—nor are they limited to Valentine’s Day nuptials—but perhaps that’s what makes them so special. For the hopeless romantic, this contemporary cut boasts a feminine shape that looks great as a solitaire on a simple band or in a more elaborate setting. Since it’s a somewhat complicated cut, you may end up paying more for the labor that goes into creating the symmetry and brilliance that makes a heart-shaped stone shine. It’s also regarded by some as a bit too trendy, so if you’re looking for something undeniably timeless, this may not be the ring for you. 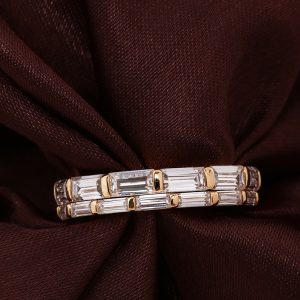 Another 1920s Art Deco-style cut, baguette diamonds feature a long, rectangular shape and 14 facets. Pictured above between the two gold bands, baguette cut bands are great for the bride-to-be who has no interest in a flashy center stone. They are, however, most commonly used as accent diamonds on many engagement rings, namely three-stone engagement rings. You can combine a large center stone with a baguette diamond on either side for a modern look. With these stones, clarity is important due to its few facets, as is the precision of the cuts. 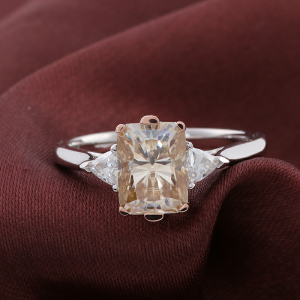 Trillion cut diamonds, originating in the Netherlands, are a popular choice for alternative brides who want a ring unlike any other. They have a triangular shape with either rounded or pointed edges and a shallow cut that makes them appear larger than they are. Trillion-cut stones are great as accents or as the main stone on a three-stone ring, but they also look great as solitaires. Because of the sharp edges on most trillion-cut diamonds, they usually require a bezel or three-prong setting to avoid chipping. Though they aren’t as brilliant as other cuts, they do have an elegant shine, making them a great choice for brides seeking a middle-ground sparkler.