The right claws for your engagement ring

Prongs may be small, but they play an important role in showcasing the diamond and protecting it from damage and loss. So it’s worth spending a few minutes learning about the pros and cons of four-prong versus six-prong settings. But if you read no further, here’s our spoiler: In our view, the security of the diamond is the most important factor to consider. If you’re not sure how many prongs to pick, go with six.

Choosing how many claws has a lot to do with the shape of the moissanite diamond you choose, to make it simple we will break down the options into different shapes. We’ll begin with round diamonds as they are the most popular shape.

ROUND DIAMOND 4 OR 6 CLAWS

In this shape you can chose 4 or 6 claws, in fact round is the only shape where 6 claws can be used. The differences between the two choices are to be found below.

4 Claw setting for round diamonds

can be used for any size stone from the smallest to the biggest, however keep in mind that most 4 claw settings come with a basket unless you specify not to have one. The basket is the part that connects the 4 claws so the diamond looks like its sitting on it. The importance of the basket is to give strength to the claws. Keep in mind that if a basket is not used, our master jewellers have to make the claws thicker.

Another characteristic is the look, 4 claw settings make the round diamond look a bit squarish, but at the same time it shows more of the diamond.

6 Claw settings for round diamonds

we recommend only using stones of around 0.80ct and bigger. When having 6 claws you need to cover more surface of the diamond. Hence a small diamond gets overpowered by too many claws surrounding it.

A six claw setting gives your moissanite diamond a much more detailed look. Six evenly-spaced claws placed around a diamond form a hexagonal shape. Some people believe this may make the diamond look rounder and bigger when viewed from a distance. This is also a visual preference. 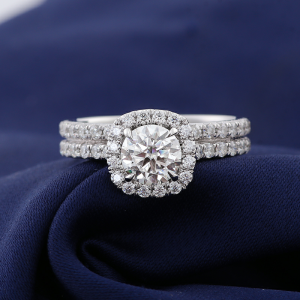 All these shapes can only be done in 4 claws making the decision easy. In rare occasions we have seen online some strange designs where 6 claws are used, that style claw design look terrible to say the least and we do not recommend it for our customers.

Pear shape diamonds are made with 3 claws most times. However in some cases when the design doesn’t have a basket its best to use 5 claws. 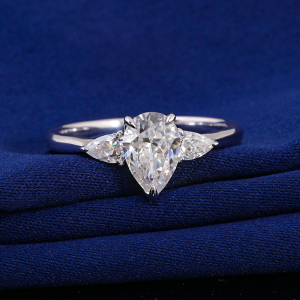 EAGLE, SQUARE OR ROUND CLAWS?

Eagle claws as its name says it is when the tips of the claws (the part that bends over holding the diamond) that look like the claws of an eagle. Currently it is the most fashionable claw and the most popular however this trend can change in the future. Looks wise as the eagle claws goes deeper in to the diamond it tends to cover more of the stone than the other 2 claw styles.

Square claws, as its name indicates, it’s when the tip of the claws finish like a square. This is the most classic claw finish and has been used by the big brand houses for decades. The claws cover less surface of the diamond so it takes less away from it. On the other hand it’s not as stylish as the eagle claw.

Round claws, as its name indicates, it’s when the tip of the claws finish like a half circle, this style it’s the most classic method and most master jewellers say it goes back for centuries. Same as the square claws they cover less of the diamond surface so it takes less away from it. On the other hand it’s not as stylish as the eagle claw.

When it comes to the claw finish, our Provence jewelry moissanite diamond setters choose the best style according to your specific diamond. However if you would like to customise the claw finish let one of our friendly staff know. 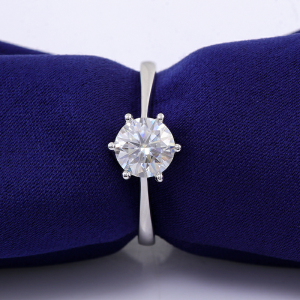