When Should You Give Anniversary Bands?

A beautiful anniversary band is undoubtedly a great way to celebrate all the years you have spent together. It seems to be a promise of celebrating every year together and cherishing all the memories while being with each other in every thick and thin.

An anniversary band is typically a set of rings that are usually the gemstone band, which is quite different from a traditional plain metal band every couple wears. Some anniversary bands look very simple and plain, others look more unique, intricate, and stand-alone fashion rings.

So, unlike an old and outdated list of anniversary gifts, every couple gives each other, giving someone an elegant anniversary band is one of the most memorable and heartwarming gifts. And honestly, there are no hard and fast rules to follow before giving an anniversary band. It’s all based on your personal choice and your partner’s preferences. Let’s read on to know which is the right time to give someone a heart-touching anniversary band. 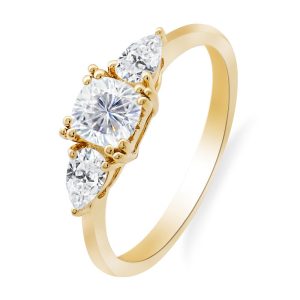 The anniversary bands are the most beautiful representation of your commitment, love, and affection for each other. When you give them to your partner, it creates a spark in your relationship, making it the most personalized gift as well.

There are lots of amazing anniversary bands, but one of the most popular styles is a three-stone unique ring that represents your past, present, and future. It symbolizes a love that will last forever, and a strong commitment to being together in every difficult time.

You Can Surprise Them on Every Anniversary 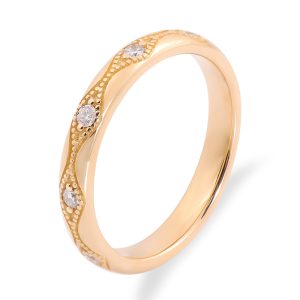 When it comes to giving anniversary bands, you don’t have to wait for 5 years or 10th anniversary. Whenever you feel that yes, this is the right time to express your love and appreciation for your partner, give them an anniversary band as a symbol of affection and happiness.

The best part is there are no set rules to follow, you can give any kind of anniversary band based on your preferences and budget. you can give them an anniversary band on and off-year. For example, if it’s the first anniversary, you can make them happy with a 0.175CTW Moissanite Anniversary Ring Band that has wonderful water ripples wrapping the stones and making it a more innovative and distinctive style.

We bet that your partner never expects such a valuable surprise, and they would always adore it for years.

Another fabulous idea is you can celebrate each year of your anniversary with a ring. For example, it’s best to give them the ring that has the same number of gemstones engraved on it as the years that you have been married. Like if you have been married for 5 years, then ask the professionals to give you a ring with 5 gemstones. And then after every year, upgrade the ring with more gemstones. It would be the best way to celebrate all the years with beautiful memories together.

To make it more unique and heartwarming, you can celebrate the random years of anniversary with a simple and fun gemstone ring. And a more intricate and beautiful anniversary band for milestone anniversaries such as 10 years of the 15th anniversary.

When You Want to Mark the Beauty of Your Relationship:

When it comes to celebrating the beauty of your relationship, and you want to mark it the best year of your life, then giving your partner an anniversary band is a wonderful gesture. It’s not necessary to follow the special times of the year, you could make any random moment special by presenting a set of lovely rings.

There are certain times other than your wedding anniversary when giving your partner an anniversary band strengthens your relationship.

It symbolizes your commitment, love, and inseparable relationship. Some of these beautiful moments include:

What are the Best Anniversary Ring Bands for Your Partner?

The fact is- any style of anniversary band could be best if you think your partner will love it.

However, the most reliable kind of anniversary band should always match her personal style and it should be a symbol of love and togetherness.

You can choose from tons of designs. From sparkling diamonds to simple gemstones. Here we have mentioned some handpicked recommendations to make things easy for you.